Stealthplate is made using atomic manipulation and nano-engineered surface treatments of the ultra-tough polycarbonate base. Thereafter, the treated surface is laminated against a double sided layer of strong acrylic adhesive which is used to adhere Stealthplate to your number plate.

Using the phenomena of constructive and destructive interference of light, these surface treatments turn Stealthplate into a mirror for the infrared while remaining transparent to the naked eye. The precise details of the process are a closely guarded secret, but rest assured that Stealthplate is made in the UK. What’s more, it is based around a design currently operating on the British Army’s Challenger Main Battle Tank!

Infrared cameras are widely used for automatic number plate recognition (ANPR) for a number of reasons: they are immune to glare from headlamps; they can use strong illumination to greatly improve image contrast that doesn’t blind a driver; they can ‘see’ through fog and rain effectively. Many ‘anti-camera’ products on the market today make extraordinary claims for what they can do. We do not make such claims because we understand the laws of physics. Stealthplate works as a mirror in the IR while remaining transparent to the human eye and ordinary ‘visible’ cameras and prevents plates being seen by most IR cameras. Proof? See the video!! 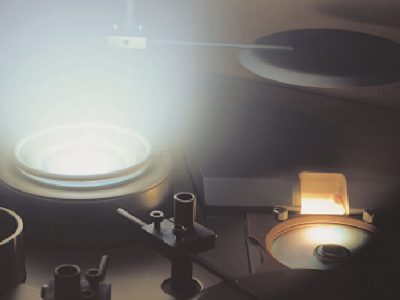 Oxygen plasma treatment inside our equipment during manufacture SPECS ANPR speed camera with two IR illuminators at each side